Showing posts from October, 2014
Show All

Three Christmas Stockings all in a row! 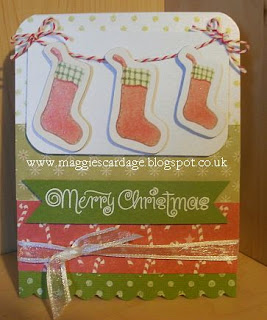 Evening, all! (Are any of you guys old enough to remember a British tv series from the 60s called 'Dixon of Dock Green'? I was a mere kiddiewink in those days, I hasten to add! I suppose these days it would be called a 'police procedural.' Every programme began with PC Dixon touching his helmet and saying, 'Evening, all.' And at the end he gave a little moral talk and said 'Good night, all.') I have a Christmas card here which was inspired by some Christmas chipboards that came with a magazine a couple of years ago. I was going to chuck them, but thought I'd give them one last chance to be useful. (Oo, I am so harsh!) The card base is made with Centura Pearl and is American A2 in size. I sliced off half an inch at the front and added a snippet of green card, which I stamped with white ink and a Hero Arts polka dot background stamp, then I punched the edge with a Fiskars Scalloped Sentiment edge punch. The stockings have been given some glitter w
4 comments
Read more 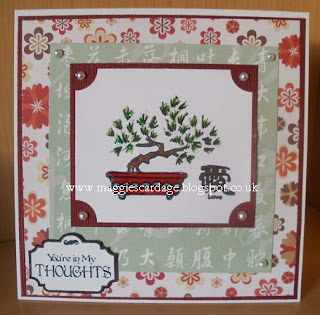 Evening, all! if you're looking for my post for 'My Time to Craft' please scroll down to the previous post. I had 2 cards to make today - one for my Dad's 95th birthday on Thursday; and one for my Flower Arranging mentor, who is in hospital - hopefully not for long. I chose an image of a Bonsai from the Woodware Oriental Elements clear Stamp Set for both cards because both recipients will appreciate it. My Dad learned Japanese after he was invalided out of the Army in 1943 and became a translator at the end of the War in the Far East. My mentor and I went to a wonderful demonstration of Japanese Flower Arranging last year. So you can see that both have an interest in Bonsai!! For my Mentor: The image is coloured with Promarkers. The leaves are stickled, and the pot is covered with Glossy Accents. The 'love' symbol is from another Woodware set, Oriental Ladies. I used a Woodware reverse rounder punch on the corners, and pearls from Hobbycraft for some bl
13 comments
Read more 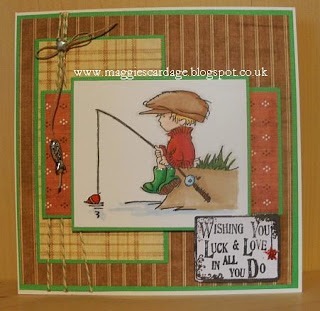 Good morning! We have another great Challenge at My Time to Craft - Hobbies! What hobbies do you and your family enjoy? DIY? Birdwatching? Sewing? Video gaming? Ballroom dancing? Whatever it is, make something to celebrate it! Where I live a lot of people go fishing in the River Lea, and I have made a retirement card for one of my neighbours who spends hours by the riverside with his rod and line. He says it is so peaceful. I have used this adorable image from Lili of the Valley coloured with Promarkers. In fact, the sentiment and papers also came from LotV! I added Glossy Accents to the lad's wellies and float, and Wink of Stella glitter to the water. The baker's twine is from stash, and I hung a little fish charm from the bow. Go and see the various creations of my teamies, you will definitely be inspired, there are some lovely makes on show! Then join in the Challenge and tell us all about your favourite Hobbies! Thanks for looking, and have a fun weekend!
12 comments
Read more 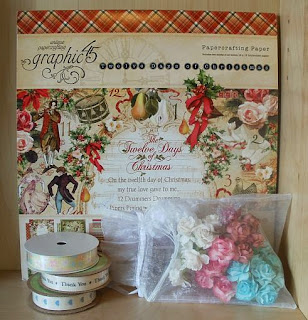 Apologies, chaps, I had a dicky tummy yesterday and had an early night, so this post is a day late. Sorry! Our new challenge at Dream Valley is Halloween. The prize this fortnight is a little different than usual: A Twelve Days of Christmas 12 x 12 pad from Graphic 45; 3 reels of ribbon; and a bag of flowers from Wild Orchid Crafts. My card for this Challenge is a spooky scene suitable for a lady who likes horror films! The purple paper is from a Papermania Capsule collection, I think the pattern looks like a sinister stormy sky! The green is from stash, it was a bit dull so I stamped it with Memento Luxe Pear Tart pigment ink, and a background stamp by just Rite called Sweet Vines . It doesn't show in the photo, but there's a subtle sheen (and I'm rather proud of it!) The moon is a die-cut circle sponged with Squeezed Lemonade, Mustard Seed and Dried Marigold Distress Inks, then I spattered some water on top to give a mottled effect. The bats are from the sam
7 comments
Read more 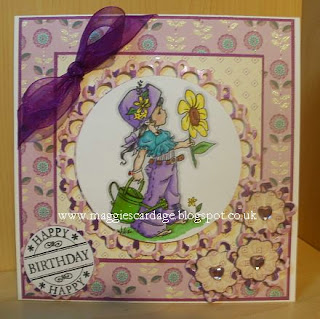 Hi, guys! This is my second post of the day, please scroll down to see my DT post for My Time To Craft. A lovely friend celebrated her birthday today so I made this card. She is Indian, so I used different Promarkers than usual for the skin of this Elisabeth Bell cutie - sadly she no longer appears on the Whimsy Stamps site, but there are lots of other adorable images there! The gorgeous papers have glitter and shine, they are New Bloom by First Edition. I used a Spellbinders die to cut the lacy mat behind the image from one of the papers. The flowers are cut with Spellbinders dies from the 'Floral Doily' set. The gems and ribbon are from stash, and the sentiment is Lili of the Valley. I am entering the current challenge at C.R.A.F.T. Challenge which has a complex recipe: 1 image and 1 sentiment - check. Two shapes - Circle and Square - check. Three papers - two square backgrounds, and the third is used for the circular mat and the lower layer of flowers - check.
10 comments
Read more 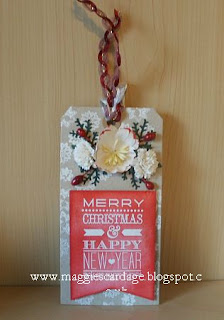 Good morning, good morning, good morning! I hope you're all keeping well and having a good weekend! I have a beef casserole simmering in the slow cooker, which smells delicious! We have a very straightforward challenge at My Time To Craft - Tag It! It does exactly what it says on the tin: Make a Tag . No cards this time, just A Tag Mine is for attaching to a special Christmas present. I made the base with a Sizzix Tag Die out of Kraft card, and white-embossed sowflakes in two corners. the sentiment is from Clearly Besotted and it is also heat embossed in white. Then I sponged Festive Berries and Fired Brick Distress Inks over the top. The 'berries' are from Hobbycraft. The flowers are from Wild Orchid Crafts and the ribbons are from stash. Do go and see the wonderful Tags that the DT has made, they are all so varied and pretty! Thanks for looking! love Mags B x
6 comments
Read more

Another Santa and application for C.R.A.F.T. Challenge DT Call 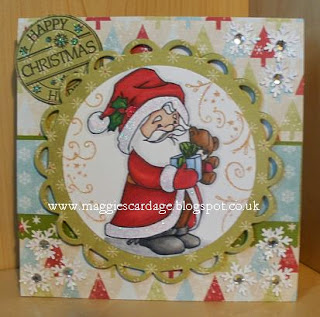 Evening, all! I hope you're all well! I have spent some time in ye olde craft hovel today, and I've made another Santa card! This is my second-favourite Santa image, after the Penny Black one that I used for yesterday's My Time to Craft Challenge. He is an old stamp from Whiff of Joy and he seems to have been discontinued, sadly. He is such a cheery chappie! I'm sorry about the photo, irl the colours are brighter - and there's lots of glitter! I coloured Santa with Promarkers and stickled all the fur trim on his outfit. The mats were cut with Spellbinders dies. I thought the white mat looked dull, so I stamped some Whiff of Joy Christmas Swirls with Tea Dye DI and stickled them. The papers are from Hobbycraft. I used a Martha Stewart Star border punch along the horizontal piece. The little snowflakes are made with a Martha Stewart PATP corner punch, they are stickled and have gems in the middle. The sentiment is by Lili of the Valley. Now I need to say
14 comments
Read more 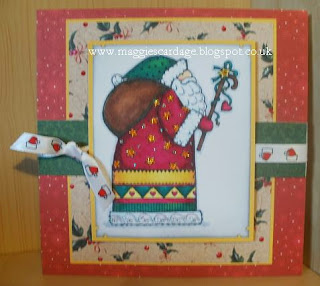 Good morning! I hope you all have a happy weekend planned with lots of relaxing crafty time! Once I have tidied my Craft Hovel (yet again!) and changed all the bedsheets I am hoping to do some colouring, because.... I have my very first Copics!!! They are Copic Ciaos, and I am hoping to ask for more for Christmas! :D My card today, however, was coloured using Spectrum Noirs. (I'm going to have to do a lot more colouring now, otherwise my Promarkers and Speccies will feel neglected lol!) At My Time to Craft our theme this week is Santa I went for an old-fashioned look. I must apologise for the picture quality, it was quite a gloomy day when I snapped it. The image is one of my favourite Santas: Antique Santa by Penny Black. He is one of their Slapstick Cling stamps. I added gold stickles to the stars on his coat and the one on his staff, and Diamond stickles to his fur trim. The papers are Papermania At Christmas Time by docrafts, sadly it seems to be unavailable now.
19 comments
Read more

October 09, 2014
Today I can't comment on some blogs because the pop-up windows remain stubbornly blank. Does anyone else have this problem, or am I extra-special (not!)? I hope your week is going well - one more day and it's the weekend, YAY!!! love Mags B x
3 comments
Read more

Dream Valley DT Challenge #92 - and don't forget we have a DT Call going on! 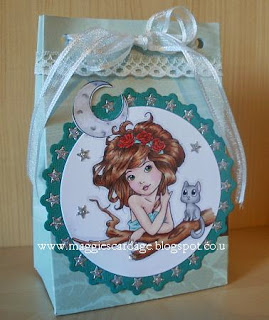 Good morning! Apologies - I'm a day late for the latest Dream Valley Challenge which is Anything But a Card So you can try your hand at a tag, a box, a gift-bag, a working scale model of the Tardis..... Our sponsor is The Paper Shelter and the DT were able to use a couple of their gorgeous images! I made a decorated goft bag. I received a We R Memory Keepers Gift Bag Punch Board for Christmas, and I'm ashamed to say I have only recently opened it! It's a very good piece of kit, the instructions are pretty easy, as long as you remember which end of your patterned paper you want to be at the top. Hint: all the punching needs to be done along the BOTTOM edge! Go on, ask me how I know! ;) The bag is decorated with a beautiful TPS image, Moon Spell which is on offer at the moment! I loved colouring her masses of hair! I used a Spellbinders Star Circles die for the mat, and cut it again in silver glitter paper to provide the stars which I fitted into the shapes on
10 comments
Read more

My Time to Craft Challenge #261 Die-cuts only 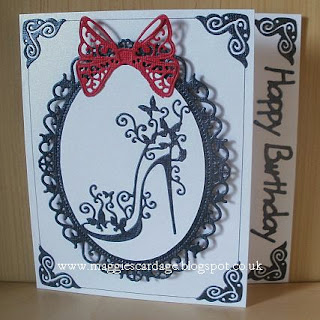 Good morning! It's another great Challenge at My Time to Craft - the weeks are going by so quickly! Our theme is Die Cuts Only - that is, use die cuts and a sentiment but no image. So I made a 6x6 card out of white Centura pearl and trimmed off an inch at one side, then dug out a variety of dies: Two are from Tattered Lace: High Heel Glam and Smaller Bow which I trimmed down and then added a scrap of card behind the knot to give more definition. The oval die and the Floral Ovals dies are Spellbinders Nestabilities. The corners are a Whimsy Shapeology set, and the Sentiment is by Marianne. I used some Papermania card which has a pearlised effect. My daughter suggested drawing lines to join the corners (thanks, Sacha!) but other than that everything has been die-cut. I had such fun making this card!! Please go and see my teamies' fantastic makes, then hunt out your dies and make something gorgeous!! Thanks for looking! love Mags B x
11 comments
Read more

Thanks for your help!

October 01, 2014
Thank you so much for reminding me that the image I used on Friday is Delicious Doodles Fairy Fae I appreciate it! love Mags B x
Post a comment
Read more
More posts